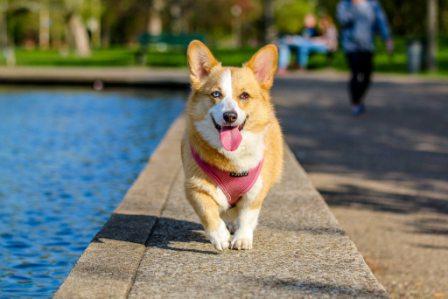 The respiratory system in dogs starts from the nose with many large as well as small air passage tubules as well as lungs. When a dog starts to breathe, the air gets along with the nostrils or mouth then to the pharynx. After this air from the pharynx moves towards the next part called the trachea, which divides into the bronchi then bronchioles in the lungs. At last, there are many air sacs known as alveoli. In alveoli, there is a barrier of a thin membrane between the blood and the air or gases. When respiratory gas exchange does not occur or inefficient availability due to disease, the animal may die due to insufficient oxygen.

There are many diseases regarding the dog’s respiratory tract from which some of the common respiratory diseases of dogs are given below:

Cancers and Tumors of Lung and Airway

Paralysis of the Larynx

There are following general signs of respiratory disorders of dogs:

Dry cough or with pus, mucus, or blood

Noise such as grunting

Dogs with respiratory tract disorders may be administered the following drugs for different disorders:

There is generally no specific treatment for viral infections. Antibiotics are useful against this bacterium. More severe signs of this disease are due to bacteria involvement, particularly Bordetella bronchiseptica.

Cancers and Tumors of Lung:

The low energy level and lethargy

Mostly, Surgery is done to remove the part of the lung having a tumor. Tumors of lungs that cannot be removed by surgical operations or those having heavy spread may be treated with chemotherapeutic drugs.

Dog having flu does not have any specific treatment. Treatment is supportive, and a veterinarian can talk over you to keep your dog comfortable during his illness and recovery in the best way by checking it. Some dogs may need supportive care to aid their recovery such as fluid therapy and also some nonsteroidal anti-inflammatory drugs to reduce the dog’s fever.

Commonly veterinarians prescribe drugs for the treatment of aspiration pneumonia or infectious bacterial pneumonia in dogs includes non-steroidal anti-inflammatory (NSAIDs) drugs for pain and fever. Expectorants are given for mucous and other secretions removal. Bronchodilators are given for relief from breathing problems and cough.

Corticosteroids may be given to your dog to reduce inflammation and obstruction. Nonsteroidal anti-inflammatory medications may be used as an alternate. Diuretic medicines may be used to alleviate the fluid build-up in the larynx and lungs. Diagnosis and treatment of the primary causes of laryngitis are essentia

Antibiotics, diuretics for removal of excess fluid, intravenous fluids and colloids, and anti-inflammatory drugs are all common prescriptions for dogs suffering from non-cardiogenic pulmonary edema.

The signs of lung flukes are cough, bloody mucus, may develop pneumonia, pneumothorax and bronchiectasis can be seen. After ingestion, in the first 3 weeks, symptoms may include abdominal pain, diarrhea, hives, and fever.

Lungworm infection in dogs is a challenge for a veterinarian to treat, but there is research that few antiparasitic drugs are effective against lungworm infection. Especially when combined with the removal of the nodules by surgery in the trachea. It may be necessary to continue antiparasitic medication for up to 2 months.

Mixing of stray animals and stress from different sources should be minimized as far as possible.

Immunization also helps to control some respiratory infections. But also there should be proper environmental conditions and animal care. There should also be proper vaccination of dogs.